Having just said that "this is about communication, not calligraphy (yet)" I went out to the bookstore and bought a calligraphy brush and ink. It was clear which kanji I would draw. So I drew it and after 4 sizes (each one larger than the previous) I decided to draw the title of Kare Kano (as most English speakers know it), 彼氏彼女の事情. This is translated to "His and Her Circumstances" in the official release, but I thought they could probably do alright leaving it. What does His and Her Circumstances tell you that Kare Kano doesn't? I suppose the original intent of the Japanese authors to communicate something. But there seems to be something lost in translation, the kanji 彼氏 translates to boyfriend and 彼女 definitely translates to her or girlfriend, they might have been stuck with business considerations -- since the title is pretty long already. Anyway, 事 and 女 were in row 8, 彼 was in row 12, and 氏 and 情 are both higher level than the course I'm currently following teaches. Not even my own ambition of JLPT N4 and Grade 3 Kanji contains these two kanji. But that's really fine. When you don't know a kanji you can look it up. Think back to before the Internet was as handy as it is now. What would you do if you didn't know a kanji? Look it up in the back of a book? Look it up in a Japanese-English dictionary? That's right, language acquisition was a lot more difficult when I started. Now it feels like we're riding a pretty effective plan toward our eventual goal of knowing a foreign language.

I do practice, I try to do grammar, but I'm kinda stuck. I'll have to find a good book or speed through Japanese for Busy People sooner. Appendices are especially nice for me. I found multiple issues with one sentence in the appendix. いま can be either 今 or 居間. It depends on the sentence. いっかい can either be 一回 or 一階 or any number of words. In this sentence, it's clear that they are trying to say 一階に居間があります。 "The living room is on the first floor." If we tried the other words, it wouldn't make too much sense: "Now is one time," which would be easier said 今は一回です。 But I'm probably wrong because abstract sentences like that are hard for me to compose unless I use the standard xはyです。 sentence format.

I did a lot but didn't blog it. It's all in my hundreds of lines of IRC logs. I did a kanji test and got 12 wrong out of 26, I finished vocabulary and figured out a way to test. I went to Kinokuniya and got a manga which is hundreds of pages of Rurouni Kenshin. It's funny to see one of my favorite anime of all time (from way back) in manga form. I also went to Uwajimaya (the real reason for the trip to Kinokuniya) and got Sriracha, 15 lbs of rice (6.8kg), and some other groceries.

I watched another video by Yuta about Japanese grammar. It's surprising to see how different his advice is compared to "books". I would be embarrassed to talk to Japanese people in keigo incorrectly, but how about talking with Japanese people informally incorrectly? I really think that overall people should accept that foreigners are going to speak terribly until they get a pattern of speech and recognition that works toward communication. I also wrote a short script to turn my vocabulary list (which goes kanji hiragana english) into a hiragana vocabulary list. This will make it so that I'm not learning kanji as much for this vocabulary, but will really hammer home the readings, which are more important.

I did the test and got two wrong. That's close enough, which means... I'm going to move on to the next row. It's friday, which means I'm 9 days ahead of my intended test schedule. I realized that I haven't actually shown what my desktop looks like while I do the kanji test. So no one actually knows how I'm drawing these kanji. So I put an image below that shows what I'm doing. Click to see a full size version. Apologies to Jen Psaki for a not 100% flattering screenshot. I'm sure she's okay knowing that I listened to her for 40 minutes this morning. 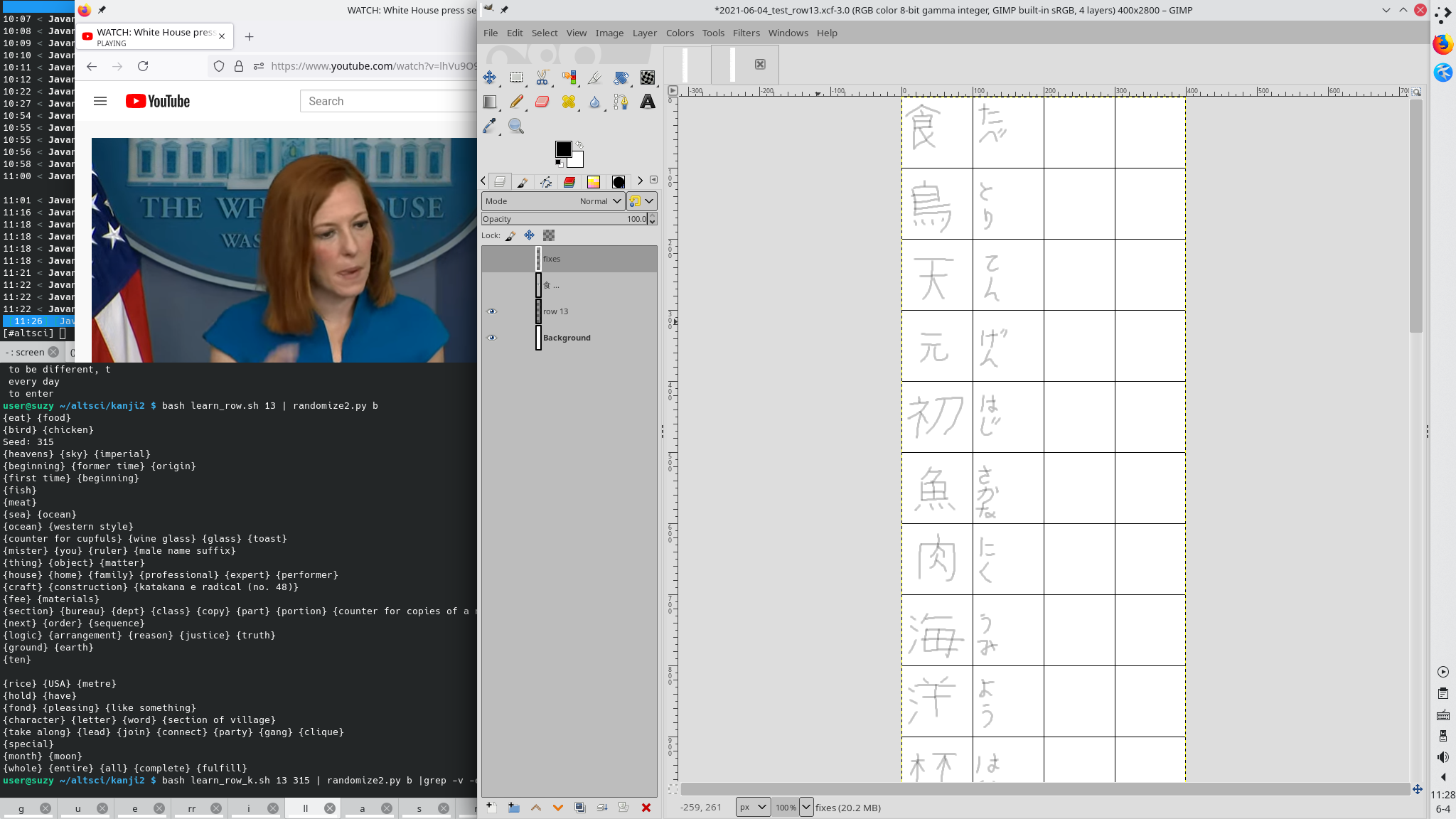 I use a tablet to draw kanji and hiragana in GIMP. I use a bash script to give myself random English definitions of kanji to draw. When I'm done, I have another script that gives me the kanji which I copy and paste into GIMP to check my work. You may have noticed that I've gotten a few readings (hiragana) wrong if you know Japanese really well. This is because I don't check all the readings because I'm fairly confident (perhaps overconfident) in the readings.

So what else is there to do? I can do a bit of grammar today if I feel like it. I have to think about the kanji I failed. I only got two wrong and I forgot one reading.. I forgot 理 and 家. While I was thinking about 家 I couldn't bring it to the fore of my mind and instead drew the first part of 屋 which I also forgot part of (which is partly why that isn't drawn).

You can tell that this test is higher resolution by a factor of 2. In previous tests I zoomed in to 200% so that I could draw more effectively and realized that the quality of my drawing doesn't really depend on resolution, so I chose to increase the resolution. That tripled the file size, but since it's only 91KB I think we can survive the extra bandwidth necessary to communicate the extra quality. Note how this is actually the size at which I draw -- previous tests are showing half resolution.

Going through the hundreds of words of N5 vocabulary (800 if the youtube video is right) over the past few days really shows me how much Japanese I already know. I didn't know every word, but I felt like I was pretty close to 90%. 90% of 800 is 720 which is pretty outstanding. How does that work? 1) We may never know 2) human beings are communication machines and 3) I have devoted hours of my life to this pursuit.

What other possible conclusion is there? That I spent hundreds of hours learning Japanese and have a really poor handle on it? This is the sort of attitude that is natural for me. I spent hundreds of hours writing and testing a game only to have numerous issues come up that I can't fix easily. Not once, but multiple times. So why is Japanese different? The true test of whether I know Japanese is whether I can communicate with a Japanese person. I don't have any opportunity to communicate with Japanese people besides watching videos or listening to podcasts, so until a test happens that is at my level we're not yet at the same place as my video game (that is nearly ready to publish). Now that I read this, I feel like voiced visual novels are pretty close to my level. I'm not able to understand completely by any stretch, but the text helps. The use of kanji without furigana is unfortunate but with hacking I am able to throw the kanji into a dictionary and attempt to understand.

Okay that's that, thanks for reading if you read any of this. If you put a single letter in the comment field and a url you want me to visit in the url field, I'll visit the url. I'll erase the comment unless I find some reason to leave it.

I'll hopefully post all tests as I pass them. Wish me luck.