Today I release a simple Sunday script building on the distant past. How do you sort a list of words in a language you're learning? The easiest order is the order you originally wrote them down in. The second easiest (and probably one of the best orderings) is random. Random ordering removes biases that a human put in and biases the list to another order. If you order your list randomly each time you read from it, you can remove bias.

This is how I ended up trying to learn kanji last year. It didn't go so well. What's wrong with random ordering of a list of words? It provides a test of one's memory. As my memory is not great, the random ordering does not actually solve the problem of memorization. So how does one memorize words? I had quite a bit of success with WaniKani this winter. I learned 85 kanji (that I had already learned on my own) and 184 words based on those kanji in a few months. What does WaniKani do that I didn't do? 1) WaniKani is an SRS. 2) WaniKani has experts to come up with a good set of data about kanji and vocabulary to cement the meaning and readings.

As with other posts in this series, this is the results of a test I took today, Thursday, Aug 26th, 2021.

This is a post that covers 17 writing tests over all the kanji I've learned, 29-30 kanji per day.

The concept behind the big test is to test 30 kanji per day, excluding the one's I've already tested to get an idea of how many kanji I know. Since I learned 496 kanji, 30 kanji per day should result in 17 tests. Because I didn't have the optimization on the first three tests, there are a few repeated kanji in the first tests (五 具 典 所 語 高). It looks like 17 will still be the number of tests. Without the optimization I'd have to do a lot more tests. Since each test takes ~15-30 minutes (drawing kanji is difficult), this optimization is necessary (as more tests are done, the number of repetition per test grows).

I was really upset as I found that the rate of recall is close to 50%. While this is substantially lower rate than when I was learning rows and testing daily, I believe that it is accurate. You can see how many I don't try on -- because any attempt at drawing is a waste of time if I cannot draw the whole kanji.

Japanese For Busy People I 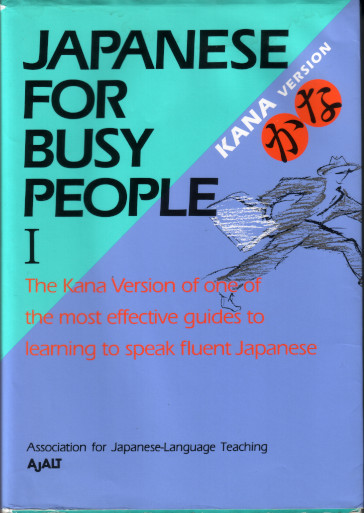 Made for beginners, this 1995 book by AJALT is boring, formal, and slow. The fact that is uses hiragana and katakana instead of kanji is a major limitation. Compared to courses made since 2010, this is more historically valuable than the price of the book. I finished this textbook despite being far beyond its material level in a matter of months of podcasts because I wanted the easy stuff to be very solid in my head -- listen, read, and think. Because it has to start at such a low level, it might be good for people who have trouble with the alternatives. But to get a substantial handle on Japanese, one will need more than this book can teach. What does it teach?