I handwrote you a blog with my good hand using my tablet. It's much higher resolution than can be displayed in this blog template, so click and zoom to read it as originally intended.

Lecture 6 of QM seems like a forgone conclusion. I'm watching ElysiaGriffin because TVGBadger is offline.

She's talking about sleep and energy and meditation. She uses InsightTimer, second person I have heard talk about it in a few days. Weird. She has ~42 viewers.

I made a quick cutting mat this morning with Inkscape, so I thought I'd share. It probably won't print on a normal printer, but because it's an SVG, it is pretty easily modifiable (I removed a row and column myself in a few minutes). I based it on the many cutting mats I saw when I searched for cutting mat on Google. That's kinda how this sort of thing works. I'm releasing it Creative Commons Attribution license. If you copy it, you're suppose to find a way to attribute me like say "by Javantea". Or don't, I mean... Where did this come from in the first place? I was inspired by others to create this.

This work is licensed under a Creative Commons Attribution 4.0 International License.

Hair in 30 minutes or less

A long time ago I described a method of creating realistic anime hair with The GIMP. Today I reproduce that method with a small limit: 30 minutes or less. Most people want hair done in less than 30 minutes. Anime or manga artists want it done in seconds. But once you've done this style once, you'll have good reason to put in a few minutes. Shojo comics and ren-ai games use this realistic style on very rare occasion to portray texture, depth, emotion, or something else. The reason why I find myself using it instead of my normal style of outlining sharp tufts of hair is for dramatic effect, showing people not a green haired mahou tsukai (魔法使い) but a living breathing shaded person. Even if they are fictional I like my characters to have some sort of reality because it improves my ability to tell a story.

Minutes 1-3
Enough with the art, let's get down to the tech. The first thing to do is to draw the shape of the hair with large or medium size brush as seen below. This should only take you a moment because you should know what shape the hair will look. It's important that you draw this on a separate layer and never draw on it because you'll need it later. Trust me. 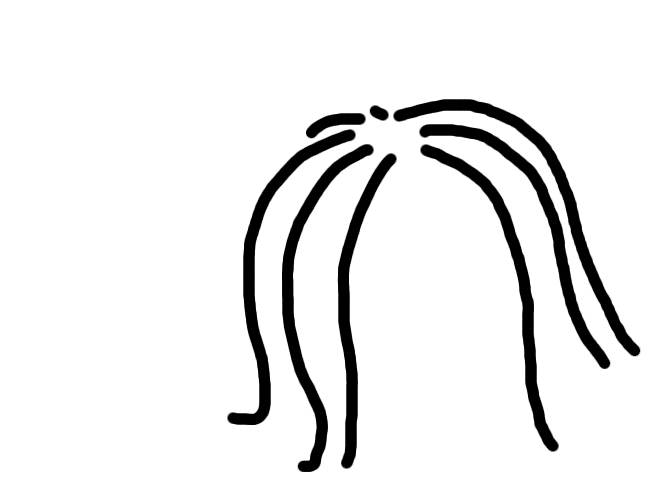 In apology for my broken promise and rather uncool decision to leave my screencast broken, I am giving you a drawing. You may remember my past drawings which were the very start of this blog (2007 May 27 - 2007 June 29).

The truth is that I haven't been drawing for almost a year actually. The Open Source Emo series and my Ninja story were the last things I've drawn except for a few things here and there until yesterday. I drew two girls yesterday with the GIMP and today I drew a third with Inkscape. The image above was drawn in one go with Inkscape. Unlike yesterday where I drew hundreds of lines to create a decent shape, this one came together with the strokes you see here -- 27 strokes and one piece of text.