First of all, check out AI3 because that's really important and fun. I've added two features. See if you can find them. Google has started indexing me slowly. I hope they don't spend too much time before they decide that it's not worth a high ranking. CPU time isn't free. I've been slowly promoting words and sentences that I like. You can tell that my favorite vocabulary is very biased toward things that I think about but don't get the opportunity to speak about. That will change as my power of linguistics improves.

Now for the music, 2012 December 27 [flac]. I actually made this today in a few hours. Don't expect too much from it, it's an experimental 3 instrument song, (plucked instrument, bass, and electric snare) played on keyboard with Rosegarden, ZynAddSubFX, and JACK. It shows the progress of my musical composing skill, still quite amateur. The plucked instrument (aka guitar but it wasn't really a guitar so much) is by far the best part of the song. I rerecorded the first 4 seconds because the original patch (which is quite good in the middle and end) started off with a cacophony of horrible discord. You might say that the entire thing is a cacophony of discord but I rather like it. The bass was put in when decided that the plucked instrument had too many silences that I didn't feel like removing. So I figured out how to make the bass work and then just hit 5 keys over and over again in any rhythm and melody that made sense. It doesn't sound very good at high volume, so I took it to its lowest audible volume so that it'd only pick up the silences and a bit the rest of the time. The drums were quite easy copy and paste and took almost no time to work with. I tried to do a really fast paced drumming session and it totally didn't work at all with the slow plucked instrument, so I chucked it. The end is rather abrupt because it ends on a short high note preceded by another high note instead of a long low note. I left it that way because endings are overrated and this is a quick experimental song and should sound like it. The middle contains quite a few silences which don't make sense and you get a little bit of the bass and snare and then a few more notes. Once I have more practice, I will certainly make my songs a lot cleaner. I wonder how many rests a rock song can get away with. Maybe 2 if it's long. Also note that the entire song is in the key of C. I haven't figured out keys well enough to use any other key than Major C so it sounds like I don't know anything about music. Well, I don't. I have spent maybe 6 months of free time in my entire life working on music and this is the output. Half of that was practicing keyboard at age 10 or so. Some of it was practicing drums with RockBand (1, 2, 3, and The Beatles) which I didn't use at all because this song didn't seem to call for it. I spent a few months of free time in 2003-2004 working on CSound, SoundTracker and MusE. Skills you learn in one music editor transfer fortunately. In CSound I created a ton of original samples which I didn't use in this because ZynAddSubFX has completely changed the way that I deal with instruments. If you're interested, there are other samples of my music here on this blog:

So now that I've described my song, let's look at the tools. Rosegarden is an important part allowing me to compose melody and rhythm. I record MIDI in Rosegarden and edit it in the editors. 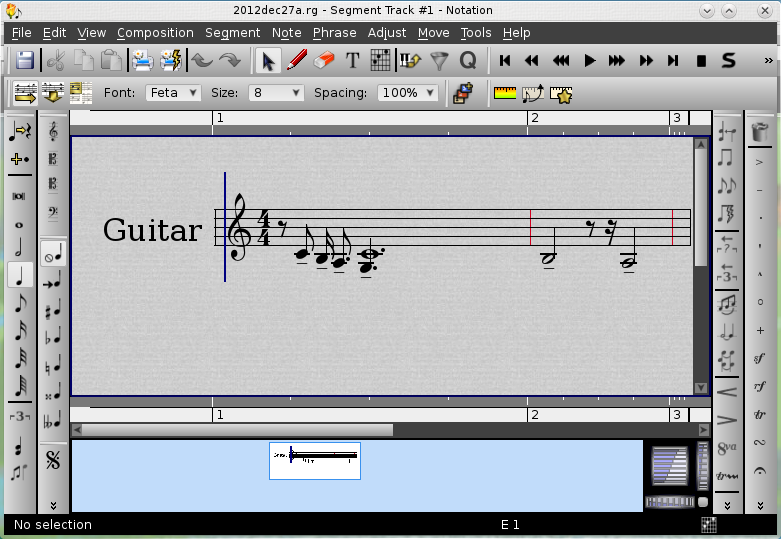 It's pretty straightforward as far as MIDI composing goes. It's only slightly more advanced than the MIDI editor I had in 1994. That's a tiny bit depressing but it shows that music is what you make of it.
ZynAddSubFX is deceptively simple and really takes the cake for being the instrument creator's dream. 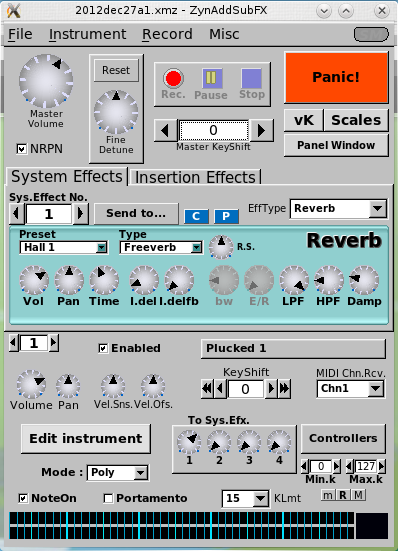 I, however, did nothing to the default plucked instrument and drum kit. I tried to create a simple cowbell using my advanced knowledge of samples and was not able to produce something worthwhile. You can see in the Rosegarden track editor that I have a recorded cowbell sound that is muted. I tried to see what I was doing wrong in ZynAddSubFX. It turns out that 20 minutes is not long enough for me to learn how to create a cowbell on my first excursion into instrument creation in ZynAddSubFX. Not to worry though, I'll have a cowbell in no time.