First Measure of a Rock Song

I've talked about composing music before several times [6]. Since this is the first measure of my first rock song, I thought I'd release it and see what people think. 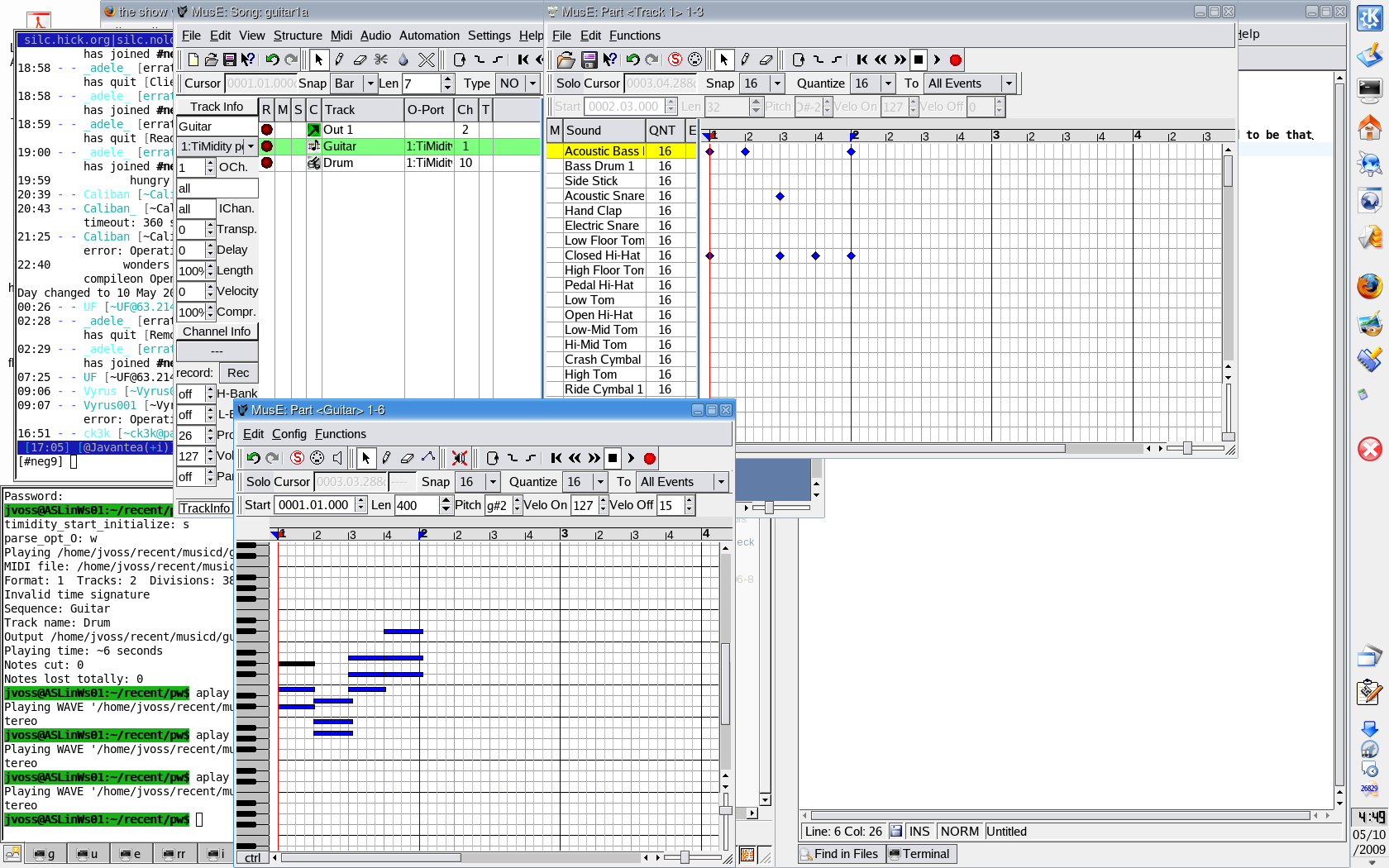 MIDI and CSound can make guitar chords, they just aren't designed to be that way. Or maybe they are. MusE allows me to do normal MIDI. When I do a few chords that should sound good, they don't because each note's length is 1/16 which is absolutely worthless. When you're strumming at your fastest when you're not Yngwie, you strum at 4/4, which means that the duration of each note must be 1/4. To do this, you have to muck around with the durations for a while. Oh well, it's easy enough and it sounds exactly right. In fact, guitar1a.med is friggin` awesome, or not. Ogg and MIDI.

I'm learning a bit more about music today. I made the first 4 chords of my first rock song, we all know that the first four chords are the most important. Especially if you're so untalented that your song repeats 4 chords over and over again. I am a drummer, I like percussion and I like techno which uses percussive sounds as the lead instead of the backup. It would almost seem like if I had enough percussion, I could do away with melody altogether. But for a rock song, melody is plenty important. So I started with a midi guitar. I drew up a few chords just at random and moved them around until they sounded right while looping. It's important to me that a song sounds correctly after the first measure repeated because listening to 4 chords and expecting the rest of the song to sound right depends more on luck than observation. I suspect that most guitarists work by trial and error and this makes me think that I might have a shortcut to making good original music. Of course, the first measure of this song is not a song itself. It's far too simple to be considered a decent song, but I can tell from the chords and the drum that nothing is obviously wrong with it. So long as I improve it by adding verse-chorus-verse-bridge-etc stuff and give it plenty of different chords to make it work, it will be a good song.

So, let's think for a moment about the physics of a guitar. When strumming chords, you are plucking 6 tuned strings that have lengths, tension, and density designed to produce correct sounds when properly played. The top string is the most dense and therefore the lowest note. The second string is less dense than the first and so on. But beyond the density, the order of plucking changes the way that the chord sounds. A good video camera could probably capture this. As a physicist I can make a simple model of the six strings that helps us understand the strum. When the pick releases the first string, the string vibrates and the pick quickly picks up the next string, which is in it's equilibrium position. The string is pulled to it's lowest position and the cycle is repeated. Depending on the speed of the strum, the strings may be initially vibrating in the same direction, the opposite direction, or any phase. Also, we know that we're playing at least 3 different notes (up to 6), so the strings will not be synchronized at all. Although we're trying to play 3 notes for our simple chords, we know that the guitar is playing 6 notes (one for each string), 3 of which are the ones we want and 3 of which are determined by the length of the other 3 strings. Of course the velocity of each note depends on the speed of strumming, but also the strength with which the left hand is holding the strings down. This can change depending on a bunch of variables, especially fatigue.

Thus we can easily see that our three note chords definitely do not accurately represent the complexity of a guitar chord. However, the sound is not awful, so this digital representation of a guitar chord is reasonably useful.

The one thing that I noticed that the guitar really needs to sound authentic is duration. Melody is determined by pitch, so a 1/4 duration pluck makes good sense while a 1/16 duration pluck sounds very strange. There are good reasons to have short durations and longer durations, but it makes sense to start simple: 4 quarter notes, all chords, no rests.