I've been working for months on drumming and even longer on composing music. For such a long time I've been pretty much unable to create music that sounded reasonable. I wondered if I just didn't have the knack. Today I learned that software plays a large part in production of music that sounds good by amateur composers. Plenty of indy guitar players sound great because they have an instrument that they've learned, but for me who has never learned an instrument properly (my keyboard and recorder experience don't count since I can't reproduce it), software has finally created the answer. I'm using MusE, Jack, and TiMidity++ with Linux. I hand compiled each, but less technically oriented people can use these programs with an audio production live CD or a distro that has packages for these programs. To find these programs, I went through the lists at Linux Sound software and looked around. I've been looking at them and using various other programs for a long time. It hasn't been until now that I've finally understood why I should use a real sequencer like MusE.

The question of why can be answered with a few files and a simple explanation of how I created my first composition. First, I created a drum track and opened up the drum roll. I clicked on the pencil tool and started adding items. I set the left and right markers by clicking on the bar scale. I put it into loop mode and started playing it. It sounded right immediately. I started subtracting notes and it sounded good. I trimmed it down to four instruments (bass, snare, hi hat, and cowbell) and figured out what sounded good. The total time from first note to last note was a few minutes. Here's the MIDI file and here's an Ogg file for those who don't use MIDI. 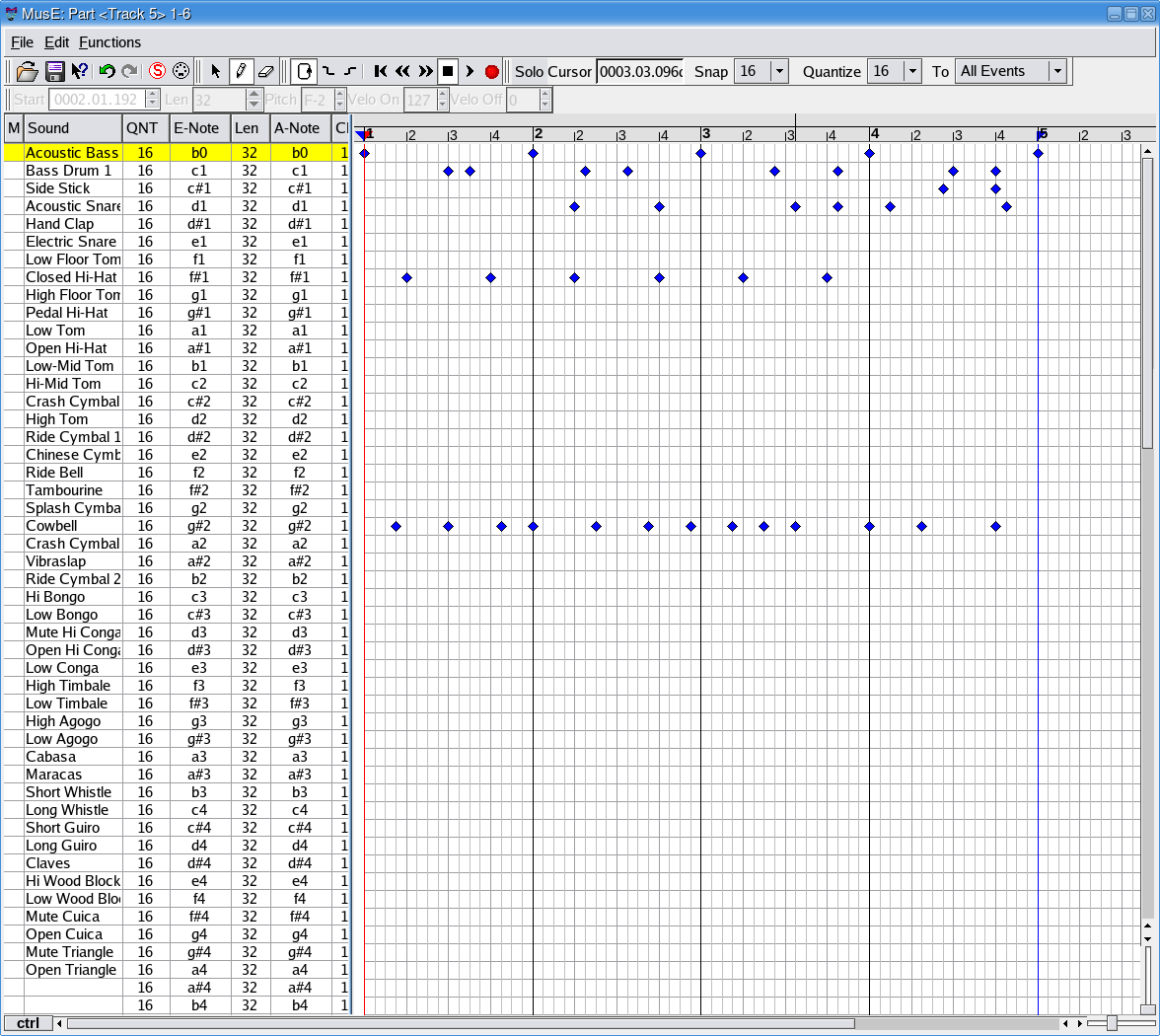 Listening to this and looking at it, I'm sure you're not impressed. I wasn't either when I listened to it once. The thing is, when it loops, it actually is fairly unpredictable, so it doesn't sound bad thirty times in a row. That's what I'm looking for in a song I'm composing.

My previous attempt at making decent music was actual physical drumming with an electronic instrument. It didn't work out great, but it certainly isn't going to be replaced with a sequencer. I still plan to play an open mic, but instead of composing with the physical drums, I'll compose with the sequencer and then drum the output. You probably noticed how off-beat my first composition is. It's actually fairly easy for me to drum off beat, so long as I know what my base rhythm is. You probably also noticed that the top bass drum always hits on measure.

So, what's the future of my composing? Other instruments of course. I'm planning to compose a song with lyrics eventually and so I'll be adding bass guitar, possibly keyboard, and vocals. My plan though is that for the live performance, I'll have all instruments controlled by my single drum instrument.

I consider this to be a very good use of a Saturday afternoon.